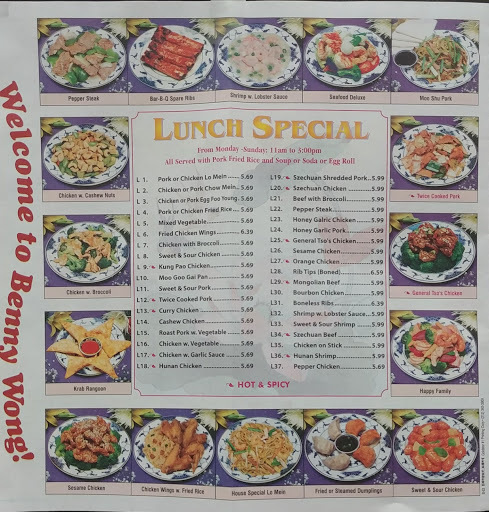 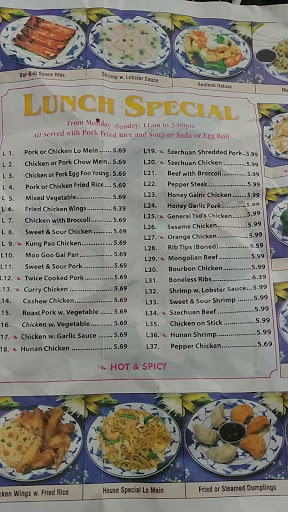 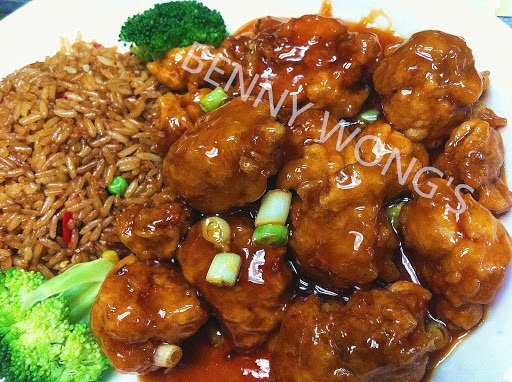 Do they have dumplings/pot stickers

What is your menu options and do you deliver?

I usually call for pick up but seen someone heading out for delivery. They also have tables and booths. Tasty Chinese food.

Took a long time to understand order & even then only received one meal, very poor attitude from staff

Food was horrible! Food came with hair rotten peppers . This people are giving out rotten food and say that, that food is fine. They need to be shut down! I wonder how they got a high rating! Maybe with all their employees! They should be closed down serving this food! Look at the pictures I posted! The last time I will order from this place!!! I would never ever recommend anyone to this place not even my worst enemy! I would advise all to go to CHINA KING! Better food, better service better everything! Everything is fresh and good prices!

Very good food, although there's a pretty noticeable smell of nail polish remover from next door I didnt mind it as muchI had a combination platter of pork fried rice with orange chicken and an egg roll

We did "Take Out" and everything was SUPERB!

Just got to go order and was completely ripped off. Ordered kung pow chicken and instead of telling me they didn't have peanuts they put in cashews and told me at the window when I was picking it up, and this was after she saw me at the window earlier and spoke to me never saying a word about it. Then she told me that they could remove the cashews, after I told her I didn't really like it with cashews, and didn't really want it. Instead of just taking it out of my order and offering to remove it from my bill. I had to be the person to pay for something I never ordered or wanted. Supported this place since day one when they first opened, now will never go back. She was even dismissive and unfriendly about it. Congratulations on losing a long time customer.

The food is good. It's not a restaurant to go on a date, but more like a take out restaurant. I call in advance and pick up in 10 to 15 minutes and it's always ready. Recommended for this purpose. I especially like the chicken with mixed vegetables and pork fried rice.

I was pleasantly surprised by the food. I have not been pleased with the other local options. My order was hot, fresh and filled with crunchy veggies and yummy chicken.

I called through sign language interpreter relay call, the woman understood my order and when i got there. My order was accurate and the food tasted amazingly fresh

My Sesame seed chicken was delicious but my sister's food according to her taste weird.

Food is very good we order here once a week..... Platters are filled to top I give them 8 stars

The food is delicious! Love it!

My favorite try it don't take my opinion

The food is honestly the best Chinese food I've eaten in the state of florida. All they need is a website to make looking at the menu easier.

Very bad service, that food is no that good and they bring all completely wrong order. No mention that when I call back they said that the correct order. To bad thai is the last time I ordered from this restaurant. Back in the day when Benny was the owner the food was good, no 👎

I order from here all the time! They are amazing! And the delightful man who takes the order and brings the food is wonderful! I have ordered a lot of Chinese takeout and this is the best!

This is the worst food ever, I just called and complained about my food . I gave them 3 chances and will never order from them again ! Food is old nasty and fries 🍟 are very very greasy can’t even eat them ! It looks like the fries and fried twice.when I called she said sorry and I told her sorry isn’t going to make me feel better , I just spend $25 and couldn’t enjoy my food or even eat it . I should have bought instead a subway sandwich for $5 !!! Don’t buy anything from here trust me 😭

It has been my take out worst experience. The first time I felt that the workers should take a course on ethics. The Employee wanted to over charge us for there own mistake. Even when she noticed it was her mistake she said “Take it or leave it “. We felt offended and disgusted of the treatment we received at this location. The food is not the best place out there , just to add to it .

I Always come here. Food is great and comes out fast

Best Place in Osceola County to get Shrimp Egg foo Young. Everything tasted fresh and the place didn't cut corners. Overall great place and will be returning for more!

First of it all the bathroom was disgustingly dirty . I had already paid for the food The rice was ready dried and hard there was barely any pork in it the chicken was disgusting dry as well and very small for $7 no soda First and last time very bad experienceThey don’t deserve not even 1 star But in order for me to post I had to give them a star

I especially like to order the chicken and broccoli with garlic sauce. It's really good. I'm not sure about the other food. The place looks really run down but I've been eating here for years. For those of you who like chicken and broccoli it taste alot like the one from new York and I'm not just saying that like all the Chinese food says. Try it...give it a chance

Always friendly when we call. They are so fast! They normally beat the time they tell me it will take by a long shot. I have never had an ordered messed up. Love Benny's!!!

Great customer service! The food is really good and the prices are fair.

Great place for Chinese would very much recommend

I've been a long time customer of Benny Wong's. Their food is basically better than everyone else's and they finish making the meals quite fast. On the occasions that they've made a mistake, they've always made up for it.

General Tso decent. Will try a different dish if I return.

Was good when we moved to town a year ago. Service is getting worse each time we order. This time, the generals sauce and the sesame chicken sauce were the same sauce. One with a few sesame seeds and the other with some peppers in it. Bland at best for both. Veggies are usually over cooked. Looking for a new Chinese restaurant.

I love this Chinese spot one of the best in kissimmee 💯🔥

Horrible. I’m sure i was their last delivery of the night. I’ve called 5x and no answer. The food is old and dry. My wife and i couldn’t even eat it. What a waist of our money. Now we have to go to bed unsatisfied and hungry! Never again will i order from here! I will call again tomorrow to speak with them.

Came here for lunch and really nice little restaurant. Great little getaway when you want a good meal and some quiet time to yourself. Very pleasant staff and great lunch specials!!! Will be back soon!

Love it! Best Chinese food around these parts.

Called for a delivery and was rudely hung up on. Tried to call back and was placed on hold for 30 minutes while you can hear people in the background laughing. Not the way you treat paying customers that arent from your state

So yummy and filling! We ordered to go and they were very fast. Will definitely go back next time we're in town

I haven’t been here in years only because The restaurant really isn’t close to me but since I was in the area, I decided to try them again. It’s just as delicious as I remembered.I wanted orange chicken so I ordered that but forgot to order it to be cooked extra crispy because most takeout restaurants seem like they basically just batter the pieces of chicken so they are usually not crunchy the way I like this dish. To my surprise, the chicken was crunchy and the sauce wasn’t too sweet like it is in most takeout restaurants:

not a friendly place

Food is ok. I called in a to go order and the lady was nice. Order took a bit long to make but I have no issues with that since it means food will be nice and fresh. Good portions and a combo will bring a soda, egg roll, soup and your entree. Rice and meat was a bit dry.

Your question has been sent.

Your review has been submitted.

Want to order over the phone?

Thank you for being with us!

We will call you back!